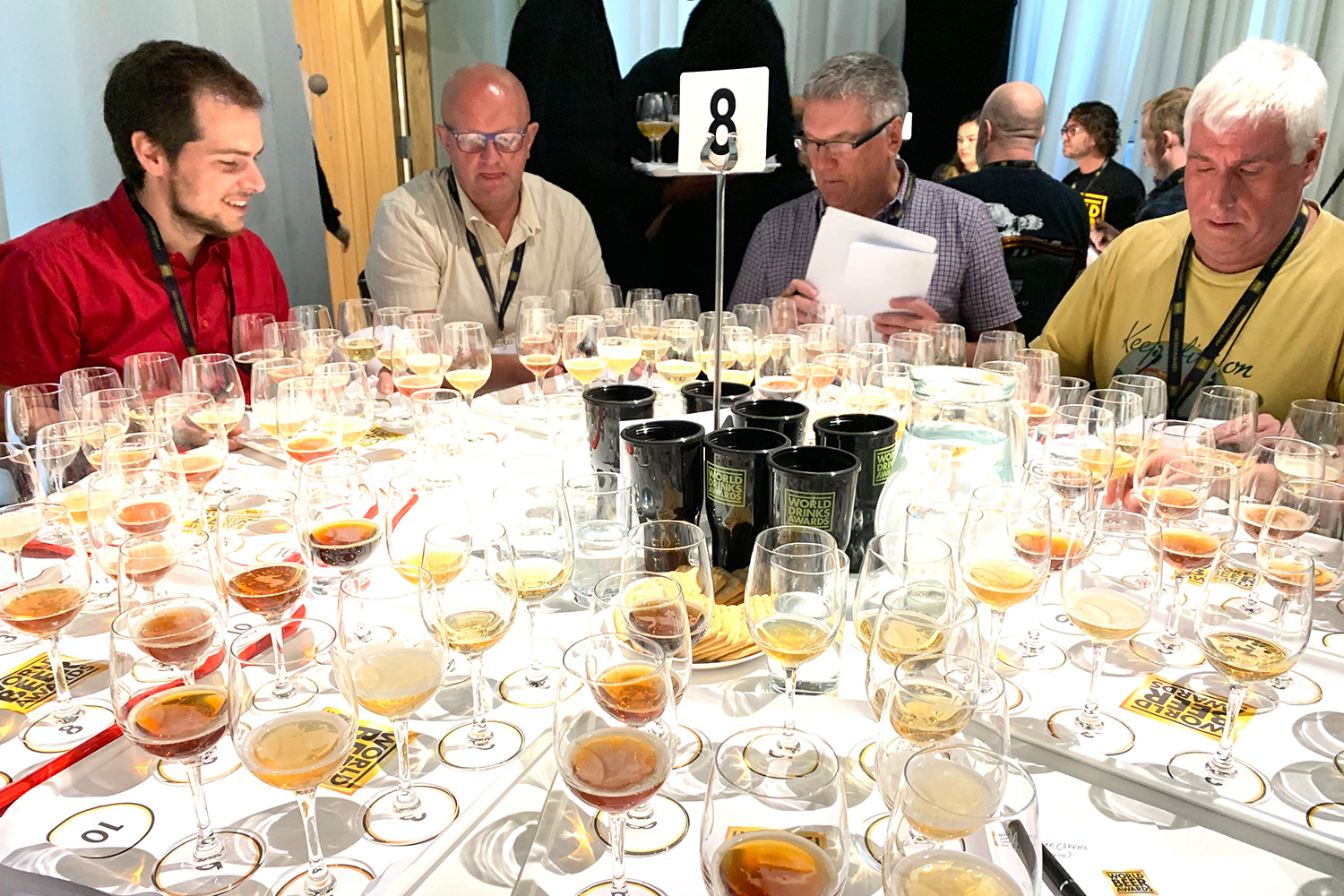 With the fate of Brexit — and indeed all of Great Britain — currently teetering on the pinnacle of a political precipice, the one thing beer-loving Brits (and that is most of them, innit?), be they “Leavers” or “Remainers,” should be thankful for is that their not-so-United Kingdom is debating to disassociate itself from the European Union and not the United States.

Why? Because they love our beers… and beer styles, the vast majority of which we nicked from them and “Americanized” (amped, hopped, soured, hazed and double-dry-hopped), then sold back to our friends across the pond. And indeed they are lapping them up. Great Britain — and London in particular — is awash in US-style craft beer and experimental brewing.

Having recently returned from a fortnight in the British capital, where I was among the judges for the CAMRA Great British Beer Festival’s Champion Beer of Britain competition and the World Beer Awards, I can report that US-inspired beers not only made their way to the final rounds of judging, but indeed took their place in the winners circle.

For GBBF, held again at the Olympia London Exhibition Centre, I was assigned to judge Golden Ales — a more modern UK style, dating back to the mid-1980s, which was created to compete with mass-marketed lagers (not unlike why the American Cream Ale style was developed in the late 1800s).

The most distinctive entries utilized American and New World hops, and many were dry-hopped. Our winner was Citra by Oakham Ales in East Anglia. The brewery labels it a Session IPA, and it certainly drinks like a very good one, with citrus and tropical notes at 4.2% ABV, but that’s not a category at GBBF. Citra even went on to score a Bronze in the Champion Beer final.

(To be fair, the top winner, the Supreme Champion Beer of Britain for 2019, was a more traditional British ale (although the hop bill did include Cascade) and a perfect example of the style: Shere Drop, a 4.2% Best Bitter from Surrey Hills Brewery in Dorking.)

Actually, Oakham’s Citra was my personal runner-up in the Golden Ales category. My palate preferred Oracle, a 4% Golden Ale from Salopian Brewery from the West Midlands. Assertively dry-hopped with a gorgeous appearance and a lengthy, citrus-forward finish, its full flavor belied its low ABV.

Similarly, the super-citrus-heavy entry in the World Beer Awards’ Specialty IPA category (a catch-all including Fruit, Brut, New England and Smoothie IPAs) that our table near-unanimously chose as the best of the lot turned out to be Twisted Grapefruit IPA, from Scotland’s 300-year-old Belhaven Brewery. Hopped with both Chinook and Mandarina Bavaria, and including hand-chopped grapefruit in the mix, the 5.3% zesty, just-this-side-of-fruit-juice quencher has a pithy finish (not dissimilar to that of Pizza Port Carlsbad’s Grapefruit Puncher IPA but at a 2% higher ABV).

American Imports Are a Brit Hit

While almost all British brewers are now making at least some US-style beers, there is still an appetite for the genuine article. And to feed that need, our own Brewers Association, which has had a presence at GBBF for some time now, was back at the Olympia again last month with some 95 beers from 26 breweries — all of which were served at the fest’s Papazian International Bottle & Can Bar (named for the BA’s founder and former president Charlie Papazian). Among the California breweries represented were Bootlegger’s, FiftyFifty, Green Flash, Heretic, Karl Strauss, Sierra Nevada and Three Weavers.

Also, one of GBBF’s many “Tutored Tastings” was a US Beer Tasting master class, moderated by the BA’s Craft Beer Ambassador – Europe, beer sommelier “Hoppy” Lotte Peplow. The talk-and-tasting, held on the opening evening of the five-day event, was packed with festivalgoers, almost all of them Brits. The panelists included BA executive chef Adam Dulye; Jeff Beagle of Georgetown, Kentucky’s Country Boy Brewing; Doug Odell of Fort Collins, Colorado’s Odell Brewing and Jamil Zainasheff of Elk Grove, California’s Heretic Brewing. They all discussed the work of the Brewers Association and walked the audience through the tastings.

GBBF veterans know that breweries across the US also send over cask-conditioned beers to complement the British real ales that make up most of the offerings poured at the fest. Seventy-two stateside breweries provided around 90 cask brews, ranging from the traditional (Brown Ale, Porter) to the exotic (Strawberry Basil Gose, Watermelon Habanero Blonde) and were available at the fest’s International Cask Bar. California breweries that forwarded firkins included AleSmith, Pizza Port, Port Brewing/Lost Abbey, Ritual, Stone and LA’s own Yorkshire Square.

The talk-and-tasting, held on the opening evening of the five-day event, was packed with festivalgoers, almost all of them Brits

It’s always a bit of a crap shoot as to which cask beers make the trans-Atlantic trek and still taste as intended, with the ones travelling the farthest most at risk. I only managed to try two casks from the Golden State (admittedly, I didn’t travel over 3,000 miles to drink local beer). Port’s Hop 15 survived the journey okay, but at 11% ABV, with all those rich, resiny hops coupled with the sheer booziness of the beer, it was difficult to enjoy without forced carbonation — as it would be in a keg. Sometimes, CO2 is the answer.

The author, right, with fellow judge Rudi Ghequire of Belgium’s Brouwerij Rodenbach at the World Beer Awards “after party” at The Rake in London’s Borough Market (Photo by Markus Raupach)

On the other hand, this festival is one of the prime showcases for a beer from Torrance’s cask-forward Yorkshire Square Brewing. Now-former brewer Andy Black and co-owner Gary Croft’s blend of roughly three-quarters Wuthering (oatmeal) Stout and one-quarter six-month-barrel-aged T’Ould Lad Old Ale was called Bend #1 (5.6% ABV). I managed to get the first pint of the beer; it exhibited no travel flaws, and poured like jet-black engine oil with an off-white head, which quickly dissipated.

Malty, chocolaty and roasty in the nose, the beer’s taste followed suit, adding a vinous yet viscous mouthfeel, slightly syrupy with definite aged notes, and a nice, long, not-too-sweet finish. Smooth, clean, grainy flavors emerged as it warmed, along with some tannins and woody/tart notes from the barrel. Throughout it all, qualities of both beer styles in the blend were evident. I only talked to one Brit who was drinking it, and he thought it was “Brilliant.”

For the last several years, the 42-year-old GBBF has run in tandem with the London Craft Beer Festival, a three-day event that highlights keg beer, mostly from the UK, but with several international breweries participating — including from the US. This year, those included Oregon’s Alesong and Cascade, Chicago’s Half Acre and California’s Sierra Nevada, Stillwater Artisanal, Stone and Firestone Walker.

The fest was held in a unique setting — the historic Tobacco Dock in East London, part of the London Docks, and dates back to 1812. Beneath the docks are vaults resembling those of a Gothic cathedral; centuries ago they were used for the storage of wines and spirits. For the LBCF, the vaults were inhabited by some of the larger participating breweries, which turned them into taprooms.

For the last several years, the 42-year-old GBBF has run in tandem with the London Craft Beer Festival, a three-day event that highlights keg beer, mostly from the UK

Of the several breakout “Beer Talks” scheduled over the three days, Firestone Walker was the only American brewery to present one; it was during the first session of opening day. The BA’s Peplow was on hand again, along with Adrian Walker (David’s brother), the brewery’s London-based export manager, and special guest Matt Brynildson, Firestone’s brewmaster, who flew in for the event (en route to his one-year brewing residency at Belgium’s Duvel Moortgat). The trio discussed the 23-year history of the brand, and poured some core classics plus beers otherwise unavailable in the UK, including Wild Ales from FW’s Barrelworks facility in Buellton, and Stickee Monkee, the Central Coast Quad, for the attendees.

And it’s not just the beer festivals and competitions; from the tied and freehold public houses in West Kensington to the railroad arch taprooms in Bermondsey to the micropubs in Sidcup, the Brits in London are in love with American-influenced craft beer.

Whether they deserve “Cheers” or “Jeers” on their impending Brexit decision (or lack thereof), it’s good to know that our mates across the water will remain fans of our beers — as long as they can still afford to drink them!