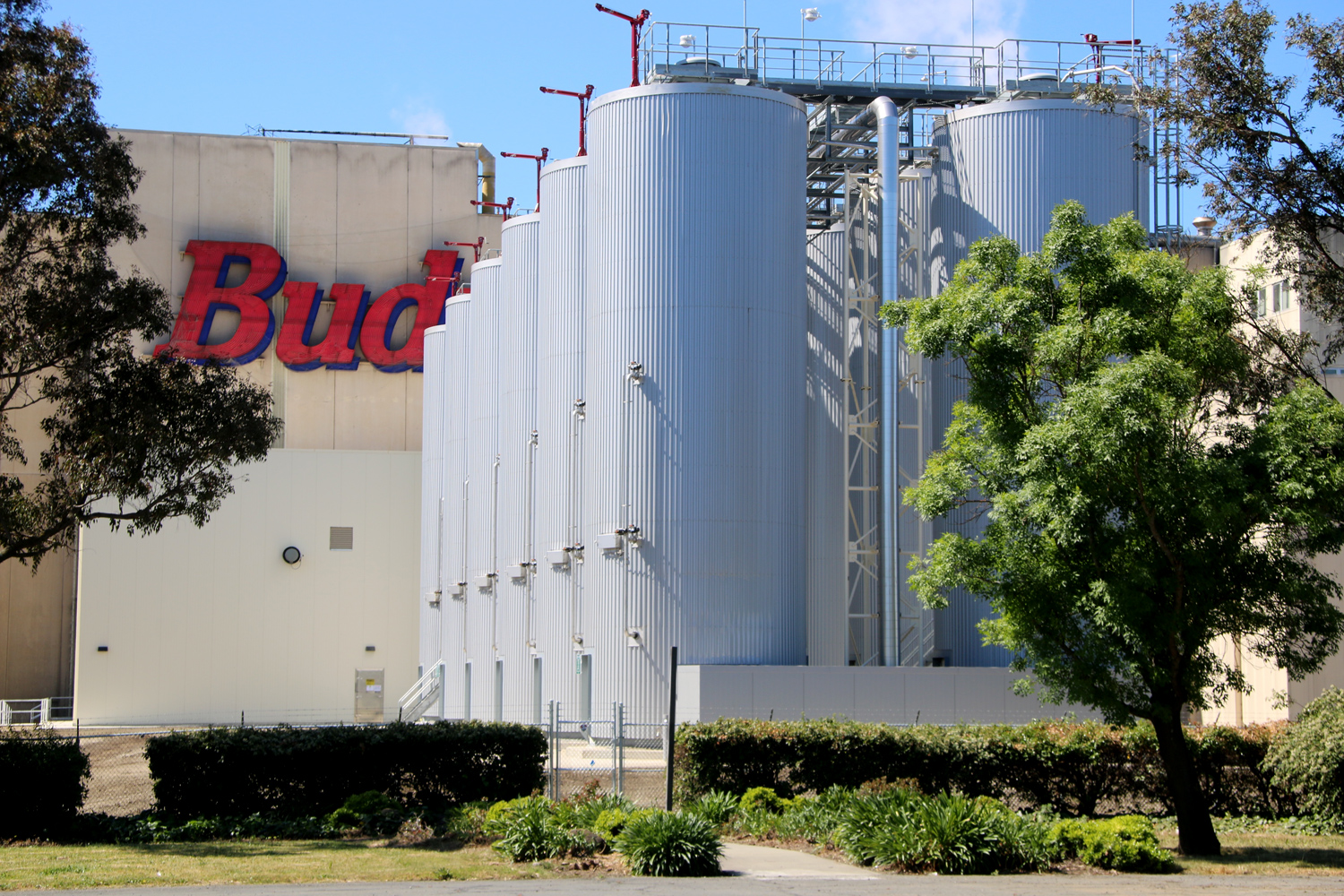 The e-mail came out of the blue, like space dust. Would I like to meet the Elysian team at the Budweiser brewery in Fairfield, Calif., and have a tour and tasting? Why, yes, I would, thank you very much.

The Budweiser brewery, with its two enormous windmills producing some 30 percent of the brewery’s energy needs, is a familiar sight to anyone traveling west of Fairfield, Calif., a town best known as the home of Travis Air Force Base and the Budweiser plant, on Highway I-80 near the truck scales. What’s new is the 12-pack of equally enormous fermenters now proudly erect in front of the big red Budweiser sign. Tall conical fermenters for a lager house? They have a plan.

I recently accepted the invitation along with a small gaggle of journalists to attend a tour and presentation put on by the world’s largest brewery featuring its recently acquired sibling, Elysian Brewing Company of Seattle. Joe Bisacca, cofounder of Elysian, headed up the group of Elysian employees now busy overseeing production of Space Dust IPA, Elysian’s wildly popular hunk of hoppiness that has been pretty much available in only the Washington state area. Until now.

Because of its fame and regional dominance, Elysian soon became a target of acquisition for international brewing behemoth Anheuser-Busch InBev, who made them an offer they couldn’t refuse back in early 2015

Elysian Brewing was founded in 1995 by David Buhler, Joe Bisacca and Dick Cantwell. Cantwell had been a homebrewer who gained a reputation at the ill-fated Duwamps Cafe, Pike Place Brewery and Big Time Brewery in Seattle. Buhler was a former spirits wholesaler who knew the trade, and Bisacca was a vice president at Seafirst Bank in Seattle. Together, these three amigos with uniquely diverse skills cobbled together a beautiful space in a vacant 1920s auto storage building up Pike Street in the Capitol Hill district.

The original Elysian brewery was a 220-seat beer hall, bar and restaurant with large exposed timbers and high ceilings that began with a rather ambitious 20-barrel brewhouse that quickly became maxed out. Other Elysian units followed, making it eventually the second-largest craft brewer in the state of Washington.

SAFETY FIRST: The group of visitors, dressed in hard hats, goggles and safety vests, enters the long corridor towards the fermenters

Because of its fame and regional dominance, Elysian soon became a target of acquisition for international brewing behemoth Anheuser-Busch InBev, who made them an offer they couldn’t refuse back in early 2015. This was another in a long line of craft beer acquisitions that had started with Chicago’s Goose Island 10 years earlier. But for the three amigos, it was life-changing.

Partners Buehler and Bisacca signed on immediately, but Cantwell, after first considering the offer, declined, creating a rift in the partnership and friendships. Cantwell hasn’t spoken to either partner since. (See article in Seattle Met, October 2015.) He now works with the Brewers Association in Boulder, Colo., as its Quality Ambassador.

Bisacca greeted us at the Fairfield Budweiser brewery and introduced us to the plant brewers and his own Elysian crew who oversee the production of Space Dust there. After donning the requisite safety garb, we headed out for a tour of the enormous facility.

The plant is large, clean, well-appointed and amazingly devoid of worker bees tending to the brewing functions. Highly automated is the term. Joe Bisacca seemed particularly fascinated and delighted with the packaging line that takes the newly bottled beers and puts them in six-packs and boxes. No people involved. Your average small craft brewery would have “all hands on deck” at packaging time.

The high-speed bottling line sent a blur of green-labeled bottles toward the unmanned packaging process. QC checks along the way eliminated low-fills and such with precision. The cases were palletized and sent for distribution.

The Big Guys know that they can brew whatever they want to brew and make it good. The problem is they can’t put their name on it and expect consumer acceptance. Hence the craft brewery acquisitions.

The brewery’s tasting room is a large but utilitarian space with lots of tables and chairs and a long, curved bar serving, in addition to Budweiser, Space Dust and a few other Elysian products. The quality of the beer was indisputable. The Big Guys know that they can brew whatever they want to brew and make it good. The problem is they can’t put their name on it and expect consumer acceptance. Hence the craft brewery acquisitions.

Not only is AB InBev spending lavishly on buying craft breweries, but it has also spent enormous sums on its multiple breweries around the country to upgrade and cross-purpose them for brewing exotic craft-style beers. The Fairfield brewery alone has been given a reported $15 million to take on the production of the new beers. System-wide, some $500 million will be spent this year, with another startling $1.5 billion to be spent in the next three years. Obviously, A-B sees craft in its future.

“This is the right home for us,” Elysian cofounder Bisacca has said. “This takes away the constraints to allow us to do what we want to do.” Expect to see a lot of Space Dust at your local beer retailer soon. It will be interesting to see the price point that the Bud plant efficiencies allow.